The first stories of sand migration on the west coast of Jutland dates back to the 1400s when villages and parishes were laid to waste. For the next few hundred years, the sand moved  across the area from the west and gathered in large sand dunes. Back then it was significantly colder than it is today, and geologists have named this period the small ice age.

In the beginning of the 18th century, the church was partially buried by sand. Each time a service was to be held, the entrance had to be dug out by the congregation. Finally, the church was abandoned and demolished, leaving only the tower, which served as a beacon to help people navigate at sea. The materials from the church were used to build in Skagen - making the church an everlasting part of the town.

One of the most famous attractions in Skagen is the Buried Church - Saint Lawrence church. It tells the story of a challenging time in Skagen's history when the sand migration claimed much of the area. The residents in Skagen were forced to leave their homes and crops in the fields to seek refuge from the sand. From the late 1300s until 1795, Saint Lawrence church was the parish church and one of the largest in the area. The church was abandoned because of the sand migration and it was demolished leaving only the church tower standing.

In Skagen, the special phenomenon of migrating dunes occurred, and through centuries the massive dunes have been migrating from Skagerrak to Kattegat. The best know of these dunes is Råbjerg Mile which is now protected. Even though broad-leaved trees were planted to stop the sand migration, it has not stopped completely and Råbjerg Mile is still migrating.

If you continue on the path form the Buried Church towards Skagen, you will enter the area south east of the town of Skagen - Damstederne. From here you will be able to see a beautiful villa, built as King Christian X's private summer residence. It was named "Klitgården" and it was constructed in 1914.

The Buried Church and "Kongevillaen"

Klitgården as it is named, was designed by the most well-known architect of that time, Ulrik Plesner. Plesner also designed several other prominent buildings in Skagen and in Copenhagen. After the death of King Christian X in 1947, Klitgården, or the King's Villa, as it was also called by many locals, was used by Queen Alexandrine. After her death, the Hereditary Prince Knud inherited the villa. Klitgården remained in royal family until the summer of 1997 when Hereditary Prince Knud and Hereditary Princess Caroline Mathilde sold the estate to the foundation Klitgården. Today it is a haven for scientists and artists. 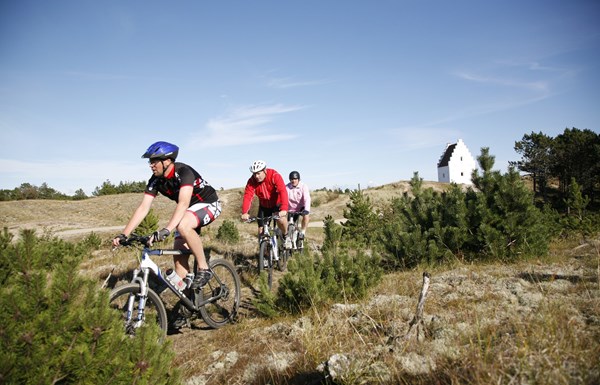